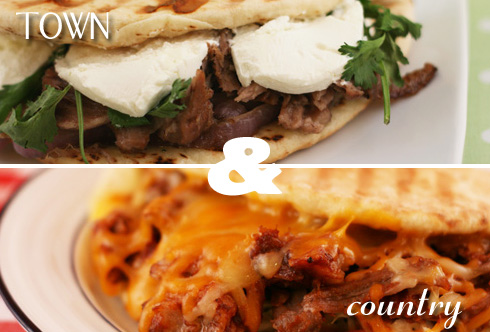 It’s a twofer, folks – my indecision is your gain!  Pulled pork panini, two ways.  Can you really go wrong?

The concept for “Town” and “Country” panini comes from a little restaurant up in Irvine called Jackson Barne.  An unassuming place in a strip mall, my co-workers and I used to lunch there often back in the day.  On Jackson Barne’s menu they’ve got a “Town” side, with lighter options like grilled chicken breast sandwiches and veggie burgers, and a “Country” side, featuring comfort items like patty melts and grilled cheese.  Suffice it to say, I ordered off of the “Country” menu more often than not, but what a great idea to offer two sets of options for varying “food moods”.  After going back and forth forever in my mind, trying to hone in on the single tastiest way to make pulled pork panini, I remembered Jackson Barne and saw no reason why I couldn’t just make two versions. 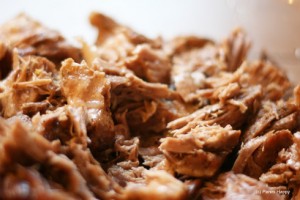 My “Town” version, while not healthy per se,  offers a kind of California twist on a pulled pork sandwich with creamy goat cheese, sweet caramelized onions and fresh cilantro.  The “Country” version – tossed in tangy BBQ sauce and nestled amongst sweet-and-sour coleslaw and a blend of melted cheddar and monterey jack cheeses – is more like the classic southern favorite.  Plus cheese. 🙂 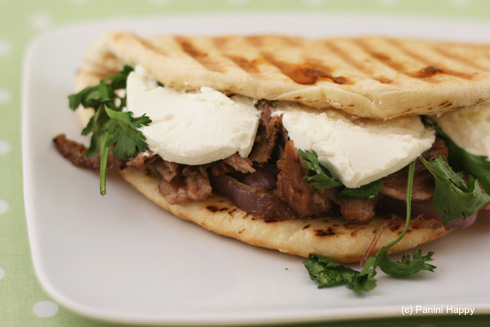 This was actually my first time making pulled pork at home.  I found a great recipe for it over at Under the High Chair, which was adapted from Martha Stewart.  What was particularly appealing to me was that it only took 2-1/2 hours to cook rather than all day.  Now don’t get me wrong, I most definitely value the flavor and texture that low-and-slow can deliver.  I just couldn’t wait that long!  Maybe one of these days I’ll do a head to head comparison and determine whether an additional 5 hours would have made a significant difference, but I’ll say that this “quick” recipe produced some rather succulent results.

Did I have a favorite among the two sandwiches?  I’d have to give a slight nod to the “Town” one, just because I really, really like caramelized onions and I thought their sweetness really brought out the sweetness in the pork.  My husband, on the other hand, preferred the “Country”.  He liked the crunchy texture from the coleslaw and the smoky flavor of the BBQ pork.  The cheese on that one kind of made the sandwich like a BBQ melt – yummy! 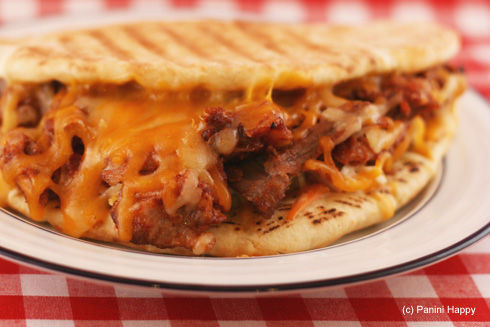 1 tablespoon olive oil
1 red onion, sliced into thin rings
Salt and pepper
4 pita breads
1-1/2 lbs pulled pork (there is a good recipe for it at Under the High Chair)
4 oz. goat cheese, cut into 1/4″ slices
Cilantro

In a skillet, heat olive oil over medium heat.  Season onions with salt and pepper and sauté in the olive oil for 15-20 minutes until caramelized.

For each sandwich: Heat a pita in the microwave on High for 15-20 seconds so that it is malleable enough to fold without breaking.  Add onions to the lower half of the pita.  Top with pork, goat cheese and cilantro (to taste).  Carefully fold the top half of the pita over the fillings and place the sandwich on the grill.  Grill for about 3 minutes until the cheese softens and grill marks appear on the pita.  Serve immediately and enjoy!

In a medium bowl, whisk together the mayonnaise, apple cider vinegar, sugar and poppy seeds.  In a large bowl, toss cabbage mix with just enough dressing to coat.

In another large bowl, combine pork with a generous amount of barbecue sauce, to taste.

For each sandwich: Heat a pita in the microwave on High for 15-20 seconds so that it is malleable enough to fold without breaking.  Add coleslaw to the lower half of the pita.  Top with pork and cheese.  Carefully fold the top half of the pita over the fillings and place the sandwich on the grill.  Grill for about 3 minutes until the cheese is melted and grill marks appear on the pita.  Serve immediately and enjoy!