{Originally posted February 1, 2009 – now updated with a new photo and an improved recipe!}

I got more than a few shocked looks and snickers when I told family and friends I was going to spatchcock a game hen this weekend on the panini grill.  There’s no escaping the chuckles – it’s a funny word.  Go ahead…get it out of your system.

I was first introduced to spatchcocking (a verb?) in these posts on ruhlman.com.  Basically, you flatten poultry by removing the backbone and breastbone so that it can be grilled quickly and evenly.  And when I read that Alton Brown had performed this feat on a panini press I knew the spatchcock would most definitely have to make an appearance on Panini Happy before long.

Flattening the bird wasn’t too difficult – I think I did a decent job for my first time.  The folks at Cookthink recently put together a really helpful step-by-step photo tutorial that made it rather easy.  The tutorial is for a regular chicken but it’s the same steps for the game hens.  Just littler.

On a panini press, with heat from both sides, you can grill a game hen in under 20 minutes—about half the time it would take to roast it.  Game hens are often sold frozen, so be sure to allow plenty of time for yours to defrost in the refrigerator (it may take more than a day) This recipe is a very simple preparation, but you should always feel free to experiment with your favorite seasonings and spice rubs 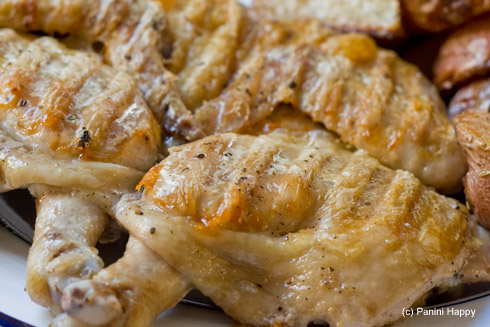