Rajas…isn’t it great when you can finally put a name to something you’ve been eating forever? I never knew until about a year ago that bold-flavored strips of roasted chiles and onions are called rajas. I made the connection not in the context of rajas con crema or any other traditional Mexican dish. Nope, my first exposure to the term rajas came with fries.

There was a long line of people waiting for the Rajas Fries from LA’s Frysmith at a food truck event I attended a while back. This dish, their most popular, consists of “fire-roasted poblano chiles, caramelized onions and shawarma-marinated steak with Jack cheese”. Over fries. Sounded amazing to this fry fan.

I made it to the front of the line and I had to crane my neck to make eye contact with the guy taking the orders (food truck windows are so high up!). I’d never heard the term rajas before. I debated in my head whether this was a Spanish word and therefore I should pronounce it “rrrrah-has” or if it was some other language and I should just hit it with a regular ol’ American “rah-jas”. Taking a cue from the poblanos and out of respect for the seven years of Spanish I took in school, I went with a tentative “rah-has”. Phew! The guy repeated it back to me the same way. Hurdle surmounted.

Take it from someone who usually doesn’t even add so much as ketchup to fries (I’m a fry purist), these rajas-and-marinated-steak-loaded fries were crazy good! Just to be clear, the roasted poblanos aren’t especially spicy, but they bring a ton of flavor and just a hint of heat.

In celebration of National Grilled Cheese Month, Tillamook asked me to contribute a recipe for the Grilled Cheese Recipepalooza feature on their Loaf Life blog. When I saw that pepper jack these was among their cheeses I could choose from, I immediately thought of the rajas from Frysmith to pair with it. I grilled the onions and peppers in minutes right on the panini maker. With the addition of pepper jack, things do start to get a little spicier so if you’d rather keep it on the cooler side go for regular Monterey Jack.

Read on for my Rajas Grilled Cheese Panini recipe…plus the chance to win a Tillamook Cheese Deli Sampler Gift Box! [THE GIVEAWAY IS NOW CLOSED] 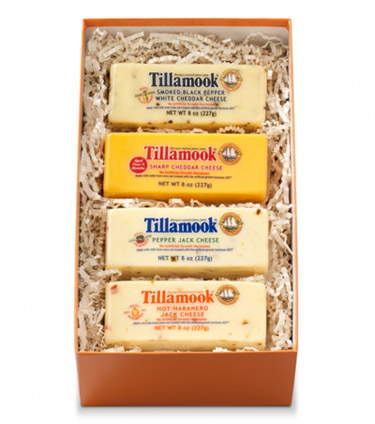 You’ll be able to make grilled cheese galore if you win this Deli Sampler Gift Box, provided by Tillamook. It contains four of their most popular half-pound loafs:

TO ENTER: Leave a comment on this post telling us which of these four cheeses you’d like to dig into first. [THE GIVEAWAY IS NOW CLOSED]

The giveaway will close on Sunday, April 22 at noon PDT. I will use random.org to select one winner and I will announce the winner in this post. I will contact the winner via e-mail – if I don’t receive a response within 5 days I will draw another name. My apologies to international readers, the prize can only be shipped to U.S. addresses. 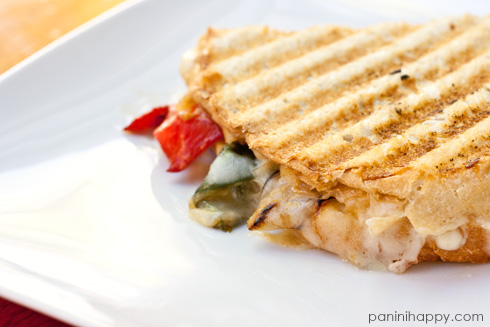 * Some grocery stores may label them as “pasilla” peppers, which is a technically incorrect (but common) designation.