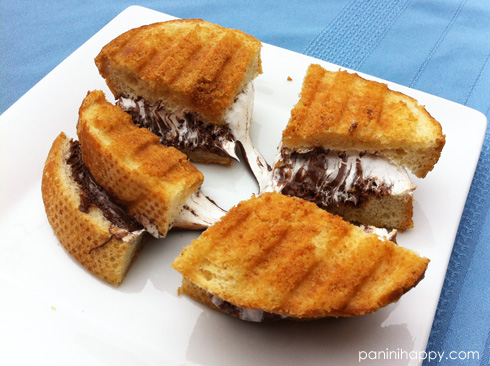 Today marks something of a milestone in my food career…my first live TV cooking demo! A last minute spot opened up on a local show so I decided to give it a shot. Other than my necklace being tucked inside the neckline of my dress (next time I will remember to bring a mirror!) things went rather smoothly and it actually turned out to be a fun experience. 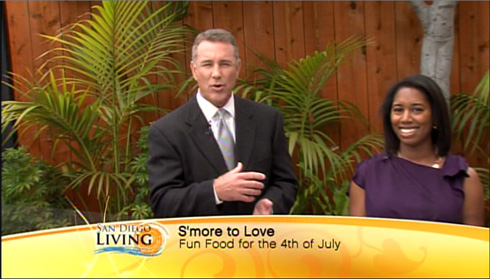 I showed up at the station lugging three bags full of food, cutting boards, cooking utensils and, of course, a grill. Having the chance to chat with some of the other show guests in the green room calmed my nerves a bit. Before I knew it, it was time to set up for my demo.

With it being the 4th of July and all the producer suggested a s’mores theme. Of course, my thing is the panini maker so I came up with an idea for Nutella S’mores Panini. Think classic s’mores meets the fluffernutter: Nutella and marshmallow cream on the inside, crunchy graham cracker crust on the outside. It’s oozy and over-the-top s’mores in sandwich form. I had to test these out after my kids had gone to bed because they definitely would be clamoring for them!

Alternatively, if you don’t have a panini maker, you can always grill these sandwiches in a regular skillet for a few minutes on each side.