Several of you commented about growing up making and eating apple butter on last week’s Chicken Sausage, Apple Butter and Fontina Panini post. As I mentioned, I had only just recently tried it for the first time. The idea of having a pile of apples cooking down with sugar and spices on the stovetop on a gorgeous autumn Sunday was too enticing to resist. So yesterday a new Apple Butter-making tradition was begun in my house.

Wow, this homemade apple butter was so much better than the store-bought version I tried last week. First of all, I preferred having the spices in there. Cinnamon, cloves and mace enhance the flavor of the apples so much. I also found the homemade version to have an appealing almost floral-like quality, which I attribute to the honey in the recipe. The house, of course, smelled amazing as it simmered away.

I hear that peanut butter and apple butter sandwiches are pretty divine – my kids will soon be the judges of that (we have a whole lot of apple butter to work through)! 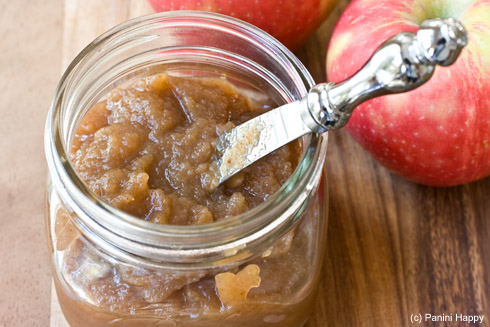