After a month devoted to grilled cheese, allow me to take a brief break from sandwiches and try something a little different on the panini grill. Like churros.

If you’ve ever had a fresh churro, hot out of the fryer, its ridges sparkling with cinnamon and sugar then you know the magic of this Spanish doughnut. I credit a Panini Happy reader for starting me along the path of trying to make Grilled Churros. Actually, she e-mailed me about making beignets on the panini grill, a similar concept that I’d love to try soon. But she got me thinking about grilling doughnuts in general. Since it’s almost Cinco de Mayo, why not grill a type that’s popular in Mexico? Plus, they’ve got ridges! 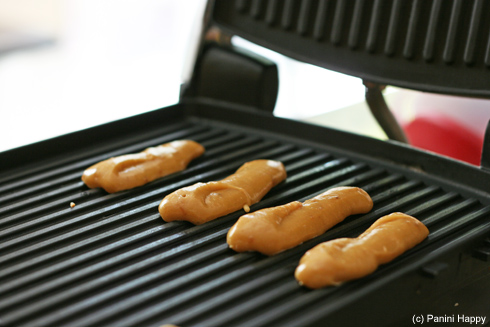 The technique was really simple – rather than pipe the pâte à choux (pastry dough) into hot oil, I applied it directly to the panini grill grates. With traditional churros you use a star tip to make ridges in the dough, but here the grates took care of that job. After five minutes I took them off the grill and brushed a little melted butter over the ridges, which drew the cinnamon sugar like a magnet. Finally, I made a quick Nutella sauce for dipping.

Obviously, I’m taking some liberties with calling these little finger-shaped pastries churros. Since they’re grilled, their texture is softer and more tender rather than crispy like the traditional deep-fried version. But they’re oblong and skinny like a churro, they’re made of pastry dough like a churro, they have ridges like a churro and they’re coated in cinnamon sugar like a churro. Whatever you decide to call them, they make a great sweet breakfast treat. 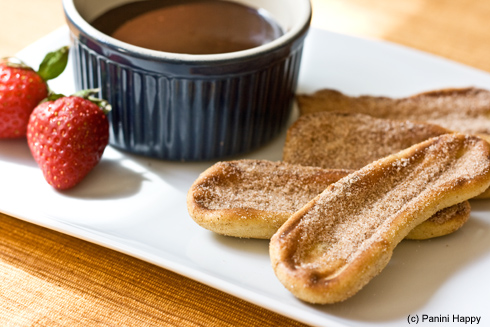 Based on the Baked Churros recipe on Latina.com