It’s that time of year again – Big Game Panini Week! Each year I create sandwiches in honor of each of the teams playing in the Super Bowl. A reader, Joanne, suggested on the Panini Happy Facebook community that since this year’s matchup between the New York Giants and the New England Patriots is a “chowder showdown” the sandwiches should pair well with Manhattan and New England clam chowder, respectively. It sounded pretty logical to me!

Tomato-based Manhattan clam chowder can definitely hold its own alongside the bold flavors in these Pastrami, Aged New York Cheddar and Peperoncini Panini. You can’t help but think “deli” when you think about New York City sandwiches. One of the city’s most famous is Katz’s Deli, where they’ve been serving their prized, enormous hot pastrami sandwich for decades. Here, I’ve matched pastrami with some sharp aged New York cheddar, tangy peperoncini (aka sweet Italian peppers) and a bold homemade horseradish sauce on pumpernickel. For fun, I decided to cut the bread into football shapes and decorate them with more of the horseradish sauce. I’m strongly tempted to invite people over to watch the game on Sunday just so I can make these again.

New England fans: get ready to see what I grilled for your team later this week! 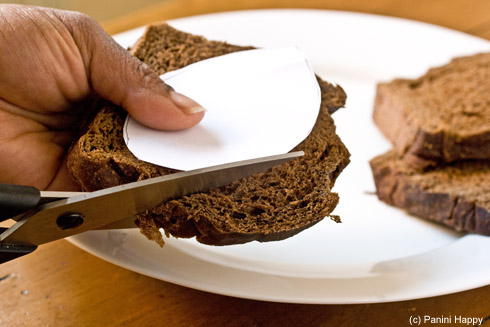 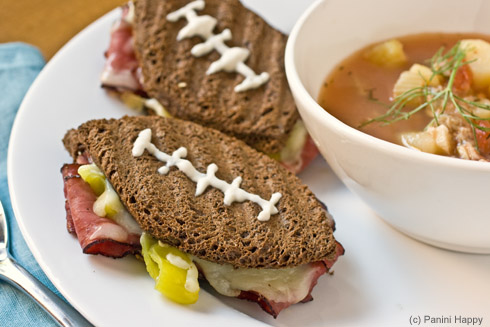 * You can find jarred peperoncini in the condiments aisle at the grocery store, near items like olives.

If you’d like to make football-shaped panini: Draw and cut out a simple football-shaped template for yourself out of paper (you can make it as large or as small as you want, depending on the size of your bread). Then just lay your template on top of each slice of bread and cut around it with kitchen shears or a sharp knife.

After the panini are grilled, let them cool slightly for about a minute. Meanwhile, spoon the remaining horseradish sauce into a small plastic bag and make a small snip at one of the bottom corners. Gently pipe the sauce into a football laces design on top of the panini.