You won’t believe how many different ideas I toyed with to represent New England and pair well with New England clam chowder. Panini Happy Facebook fans suggested lobster rolls, fried clams, even a deconstructed New England clam chowder on Boston brown bread (I especially liked that creative one). In the end, I arrived at Grilled Cod Sliders on Parker House Rolls. Inside I’ve dressed them up with a little bacon, lettuce and tomato as well as homemade dill tartar sauce.

Cod has deep ties with New England. I never even thought about it before but did you know that Cape Cod was named for the volume of cod found in Massachusetts Bay? A carving of a codfish, known as the Sacred Cod, hangs in the House of Representatives chamber of the Massachusetts State House in Boston, symbolizing the importance of the fishing industry in the state.

Any fluffy dinner roll would work great for these sliders, but if you want to keep the New England theme going, buttery Parker House rolls like the ones I baked are the way to go. They originated at the Parker House Hotel (also the birthplace of the Boston Cream Pie) in Boston in the late 1800’s. I followed the recipe from Joy the Baker, but there are also some great ones from King Arthur Flour and The Pioneer Woman.

Many thanks to Kelly from Evil Shenanigans and Lisa from Lisa is Cooking for the tartar sauce ideas they shared with me on Twitter. Kelly’s sauce base combined with the flavors of pickle juice and dill from the recipe Lisa shared makes a pretty amazing condiment to go with fish!

In case you missed it, I shared football-shaped Pastrami, Aged Cheddar and Peperoncini Panini earlier this week in honor of the New York Giants. May the better team win this weekend! 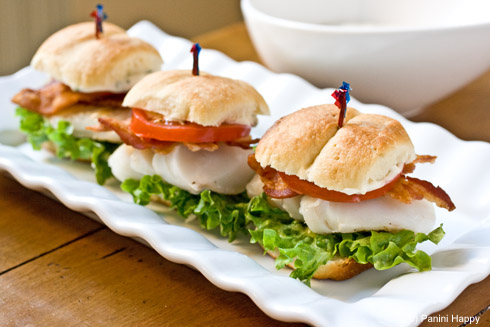