Back in April, as I whined about noted the 45 minutes it took me to slowly caramelize the onions for Tom Colicchio’s Gruyère with Caramelized Onions panini, I received my first clue that the man believes delicious food sometimes takes a good amount of time and patience to prepare. So it did not come as a real shock when his Red Wine-Braised Flank Steak with Roasted Peppers, Onions & Gruyere (…exhale…) sandwich recipe from his ‘wichcraft cookbook took nearly 4 hours. 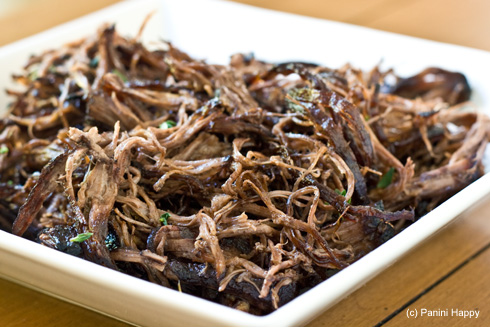 I cannot begin to describe how intoxicating the house smelled all day long. The lean flank steak is seared on the stovetop and then braised in the oven for two-and-a-half hours in red wine, thyme, garlic and other aromatics. The result is succulent, flavorful meat with a pleasingly crisp exterior. It pairs rather well with the acidity of the grilled red onions and roasted red bell peppers. And, of course, Gruyère loves beef. Good things, indeed, come to those who wait.

The ‘wichcraft cookbook is full of these carefully crafted showstoppers. And while it may not be feasible to prepare them on a daily basis, it sure is a treat to indulge in them when you’re feeling like making something extra-special.

Red Wine-Braised Flank Steak with Roasted Peppers, Onions & Gruyère Panini
Adapted slightly from ‘wichcraft: Craft a Sandwich into a Meal – and a Meal into a Sandwich, by Tom Colicchio

Choose a heavy-bottomed ovenproof skillet or Dutch oven that’s large enough for the flank steak to lie flat but is as snug as possible. Add 2 tablespoons of the oil to the skillet over high heat. Once the oil starts to smoke, add the meat (I highly recommend using tongs!) and cook for 5 to 7 minutes on each side, until deep brown in color. Remove the meat from the skillet and set the meat aside.

Add the carrot and onion to the skillet, followed by the garlic. Sauté the vegetables over medium-high heat until they start to brown but are still firm. Return the meat to the pan. Add the red wine – enough to come three-fourths of the way up the side of the meat. Add the thyme and 1 teaspoon of the salt, cover the skillet, and transfer to the oven. Braise the meat for about 2 1/2 hours, until the meat can be pulled apart with a fork. Transfer the meat to a plate to rest and cool.

Reserve and strain the pan juices and pour into a saucepan. Over medium-low heat, reduce the juices until thickened (it should coat the back of a spoon). With two forks, separate the meat into chunky strings and roughly cut them crosswise into 2- to 3-inch pieces. Place the meat in the pot with the reduced juices and coat well.

Brush the red onion with the remaining 1 tablespoon vegetable oil. Grill the onions (without separating into individual rings) for about 2 minutes until charred on the outside and slightly cooked on the inside. Place in a bowl and separate into rings. Add the peppers, olive oil, sherry vinegar and remaining 1 teaspoon salt and mix well.

For each sandwich: Slice a ciabatta roll in half. Place 1 slice of cheese on the bottom half. Add the meat, the onions and peppers and another slice of cheese. Close the sandwich with the top half of the roll. Grill the sandwich for 3 to 4 minutes until the cheese is melted.