What do you do when you discover five different types of chocolate hazelnut spread in your pantry? Well, if you’re me, you conduct a little Chocolate Spread Smackdown — a non-scientific, yet indulgently fun, taste test to understand the pros and cons, similarities and difference between the various spreads on the market.

It was not difficult for me to recruit a group of taste testers for this activity — my husband (Mike), kids (ages 4 and 6) and in-laws (Ken and Susan) were more than willing to participate. I set it up as a blind taste test — they didn’t know which spread was which, or even which spreads were involved in the test (although they knew that one of them would be Nutella). I gave each taster a plate with 5 spoonfuls (in some cases forkfuls, as I ran out of spoons!) of chocolate spread. I’d marked the back of each utensil with a number so I could tell which spread was which. The tasters’ job wasn’t to decide which was “best” or “worst”, but merely to describe what they were tasting. The results proved interesting!

I’ll start with Nutella, since it’s the spread most of you will recognize, but we actually did the test in a random order and the tasters didn’t taste the same spreads at the same time (in an effort not to be influenced by each other’s comments). This wasn’t scientific, but I tried to make it fair! 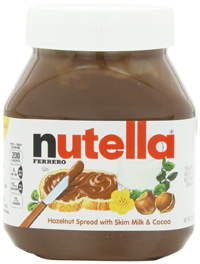 Overview: “The Original Hazelnut Spread”, first imported from Italy to the US over 25 years ago. It is now the number one selling branded hazelnut spread in America. Sold in grocery stores.

Blind test feedback: All of the testers know and love Nutella (although only one — my husband — identified it), so it’s not surprising that this familiar flavor seemed to appeal to them most. 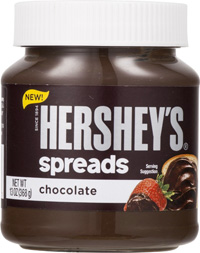 Overview: Hershey’s launched their new line of chocolate spreads last month in an effort to compete with Nutella. The Chocolate flavor is being marketed as a “smooth, creamy chocolate spread makes any snack an indulgent dessert” as well as a baking ingredient. Sold in grocery stores.

Blind test feedback: The testers detected a texture difference with this one, describing it as “gummy” and “sticky”. 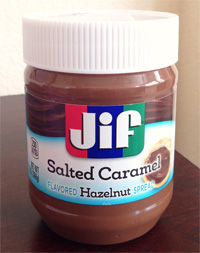 Overview: Jif launched its lined of hazelnut spreads back in 2012 — they say their spreads “make anything your new favorite thing.” If we were doing a true apples-to-apples test, I would have had the tester try Jif’s new chocolate flavor rather than the salted caramel, but salted caramel is what I had on hand. Sold in grocery stores.

Blind test feedback: The testers could tell there was a notably different flavor (they guessed butterscotch), compared with the more chocolate-forward spreads. 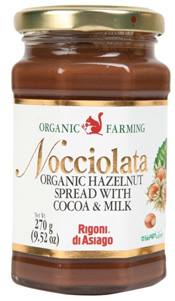 Overview: Nocciolata is an Italian chocolate hazelnut spread, made from all organic ingredients. Also, unlike some of its American counterparts, it doesn’t contain palm oil, artificial flavors or GMOs. Sold in many major grocery stores, as well as specialty markets.

Blind test feedback: The nutty flavor came through prominently to my testers — as it turns out, hazelnuts appears higher on the ingredient list for Nocciolata than for the others. 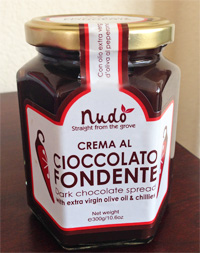 Overview: This was my spicy curveball in the test — an Italian olive-oil based spread made with dark chocolate and chilies. Nudo doesn’t seem to have it on the market anymore (I’ve held it for about a year), but I thought I’d go ahead and share the taste results anyway!

Blind Test Feedback: They noticed the spice! Surprisingly, my kids didn’t balk — in fact, they really liked the spicy chocolate combination. My mother-in-law, Susan, also noticed it wasn’t quite as sweet (it’s the only spread in the test that doesn’t list sugar as its first ingredient).

In case you were wondering, of course I tasted too! I tried my best to make it a double-blind test, so that I wouldn’t know which spread was which, but it turned out that there were visual differences across the spreads so I couldn’t help but identify them. Again, it wasn’t a scientific test at all, but I tried to remove as much bias as I could. But you don’t have to take our word for it — grab yourself a spoon (or 25) and taste for yourself! 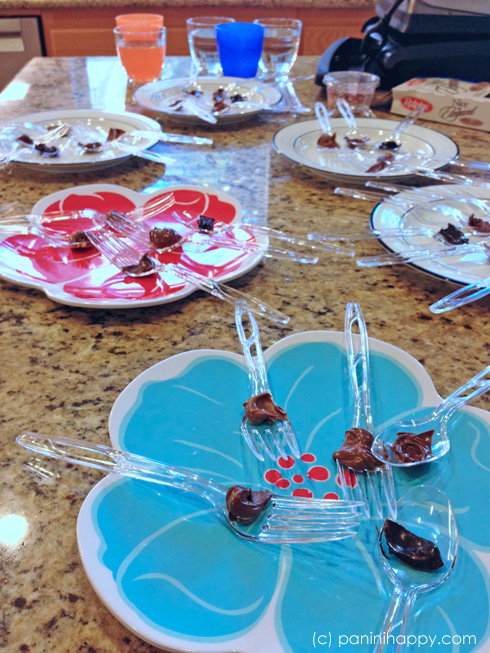