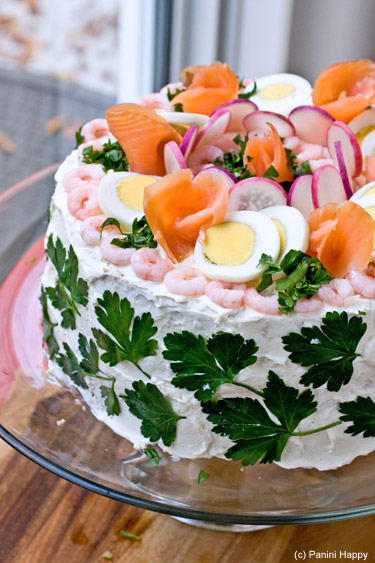 Panini Happy – my blog all about sandwiches and other creative recipes for the panini press – is four years old this week! And since I always bake my kids a cake on their birthday I decided my blog ought to have one too. Of course, it’s a sandwich cake! 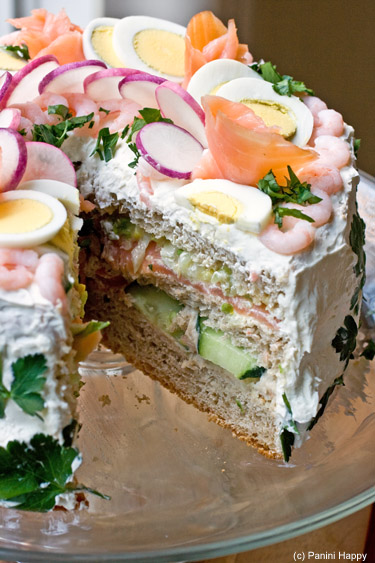 Introducing the smörgåstårta! If you haven’t seen one of these before, it’s a Swedish sandwich cake with layers of bread separating creamy fillings. I can’t remember where I first heard of them but I’ve been aching to make one for the longest time. If you run a Google image search you’ll be amazed at the wide range of incredibly creative smörgåstårtas out there. In the end, I decided to make the recipe from Saveur, which is filled with smoked salmon and smoked herring mousse. Read on to see what goes into making one of these party showstoppers! 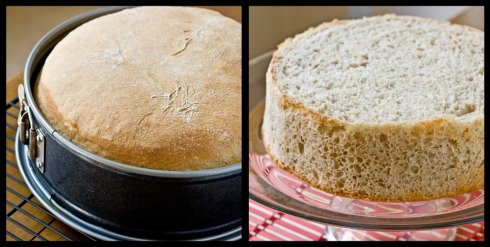 After browsing dozens of smörgåstårtas online, the Saveur recipe won me over with the bread. I really wanted to make a round cake, but in most cases that involves cobbling together multiple pieces of rectangular-shaped bread and trimming it all into a circle. Baking a cake-shaped loaf of bread sounded like a much better way to go. It’s a light whole wheat bread and comes out of the springform pan in the perfect shape and size for a smörgåstårta. 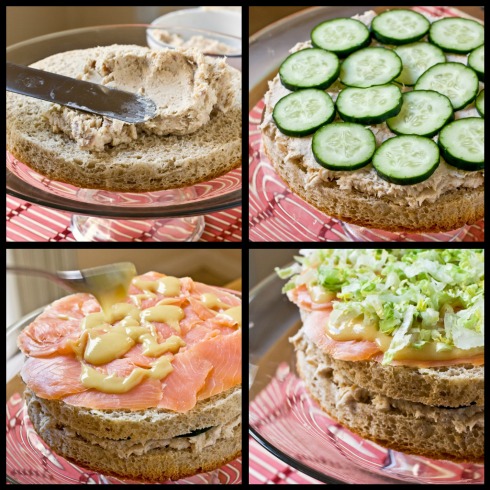 After I took a deep breath and tentatively divided the bread into three mostly-equal layers (phew!) it was time to bring on the fillings. The recipe called for the bottom layer to be a mousse made with smoked herring, but since I couldn’t find it at the store I went with smoked trout. A layer of sliced cucumber went on top of the mousse, then it was on to the next tier: smoked salmon, a sweet mustard sauce and shredded romaine lettuce. All the while, I’m hoping and praying that I’ll like how this all tastes together because these were definitely some out-of-the-ordinary flavor combinations for me! 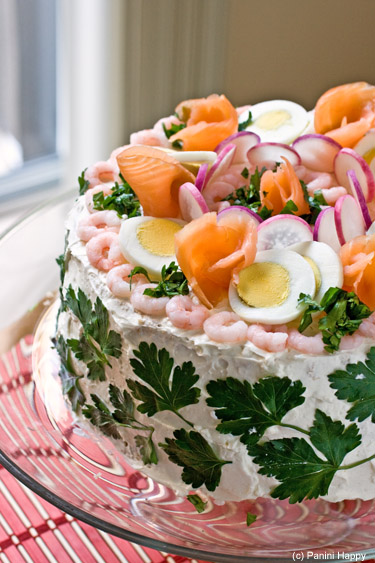 The final step is to “frost” the cake with a mixture of cream cheese and sour cream and then decorate. I kept my adornments pretty close to those in the recipe – smoked salmon, shrimp, hard-boiled eggs, radishes and parsley.

I’m proud to say that this cake, which took me the better part of a day to complete, actually tastes great! You gotta like smoked fish, of course (and we do). When you eat the bread and filling layers all together it really is like eating a sandwich. It’s even better once the flavors have a chance to meld together, after a few hours in the refrigerator. I definitely see how this became popular in Sweden for parties.

Thank you guys so much for an amazing 4 years!

Get the smörgåstårta recipe at Saveur.