When I heard there was a contestant on the most recent season of Food Network Star, Jeff Mauro, who called himself the “Sandwich King” you know I had to tune in to see what this guy was about. King, eh? Not that I think of myself as the “Sandwich Queen” or anything…oh, maybe I do :-)…but nonetheless I was intrigued to watch him adapt each week’s challenge into some rather enticing comfort-oriented sandwiches. As you may know, Jeff ultimately won the competition and Sandwich King is now a show on the Food Network.

I saw my chance to taste one of Jeff’s creations when I came across his recipe for a Mortadella and Fig Sandwich in the latest PEOPLE magazine (my weekly celebrity gossip indulgence). It was actually featured on the first episode of his show. He makes an easy fig jam on the stovetop and spreads it on focaccia with Mortadella and some sliced sharp Italian cheese (I went with sharp Provolone). I knew I’d love this sandwich before I even tasted it – you know I can’t resist a good sweet and savory combo. The sandwich pictured in the magazine wasn’t actually grilled, although the recipe calls for grilling. Here I show you the real deal – and it’s a fantastic sandwich.

All right, Sandwich King…I think we can share the throne. 🙂 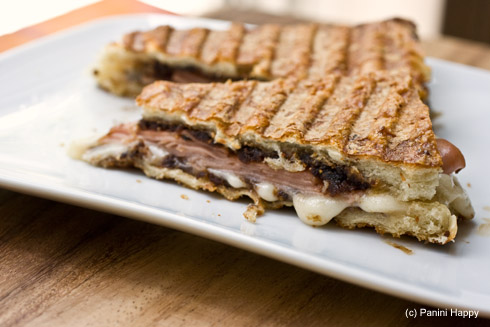 Adapted slightly from the Mortadella and Fig Sandwich recipe by Jeff Mauro in PEOPLE magazine, 9/19/11

NOTE: Remaining fig spread can be refrigerated in an airtight container for up to two weeks.