If you overheard a triumphant yelp coming from my kitchen yesterday afternoon that was me, elated over the fact that I finally figured out how to grill duck breast on the panini maker with crispy skin!

It practically became a mission. I grilled duck breast after duck breast – skin side up, skin side down, high heat, low heat. Over and over again I got the same result – quickly cooked meat with a rubbery fat cap on top. The financial expense was starting to add up (duck breast isn’t cheap). Defeated, I was ready to put this idea aside and move on. I had one final duck breast left and I went for a Hail Mary pass – cooking the duck skin-side down with the grill open in hopes that this approach would give the duck a chance to render its fat without cooking the meat too fast.

After six or seven minutes I peered under the duck to find the result that had been eluding me thus far: browned, crispy skin! I flipped the duck breast, closed the lid, and the other side finished cooking several minutes later. 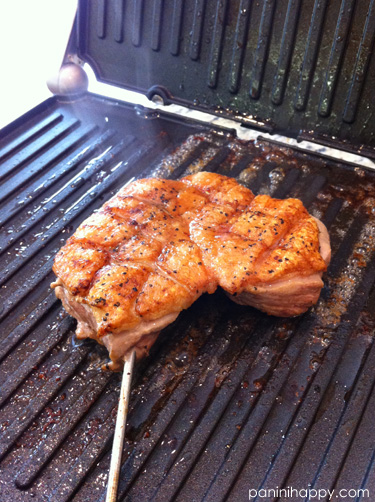 High fives all around!

After all of the effort that went into figuring out the technique to grill the duck just how I wanted, it only seemed fitting to use it in an extra special sandwich. My husband came up with the concept for Grilled Duck Breast Club Panini – slices of that succulent duck breast, layered with strips of smoky bacon, fresh tomatoes and arugula, and creamy Brie. It’s a decadent combination for sure, but I doubt you’ll have any trouble finding someone willing to split one of these with you. 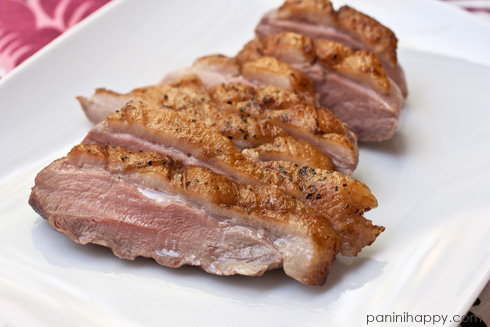 I wish I’d taken some step-by-step photos to show you how to score the duck breast but, as I mentioned, I didn’t know this was going to work! My friend Sommer from A Spicy Perspective has a great tutorial on her blog, as well as a stovetop cooking method I’d recommend in the event you have a panini maker that doesn’t allow you to adjust the temperature (it’s important to grill at lower heat in order to render the fat without overcooking the meat). 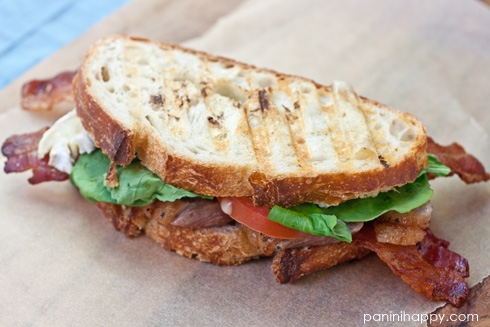 * If your panini maker doesn’t allow you to adjust the temperature, I wouldn’t recommend using it to grill duck breast. You’ll probably want to cook your duck on the stovetop or purchase it already cooked. To render the duck’s fat slowly it’s important to be able to cook it over lower heat – the default heat setting on a panini maker without temperature adjustment may be too high to achieve this.